Blog - Latest News
You are here: Home / When a Woman Loves her Man, She Takes Him Fishing in Kona Hawaii 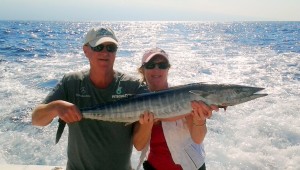 When a Woman Loves her Man, She Takes Him Fishing in Kona Hawaii.  That is what Lisa Yellowlees from Victoria, BC did for her sweetheart, Rod Bieller.  Rod loves to fish, especially in Kona Hawaii, so for a “milestone birthday”, Lisa called us months in advance and arranged the surprise fishing trip for him.  There was a good prpbability that he would be calling to book a trip anyway, so we had to steer him to the date already planned for him.  This was so much fun to be a part of.  Rod and Lisa have fished with us several times in the past and we were looking forward to going again.  Rod is a retired Fire Battalion Chief  from Victoria so we have a lot in common.  So now we have a surprise charter for Rod, we are out almost all day before we finally get a bite.  This nice Ono (Wahoo) was just what we needed.  You don’t want to get skunked on your birthday.

January and February into March are excellent months for Shortbill Spearfish, Ono and Striped Marlin.  There are some nice Ahi Tuna around too.  These months transition into the famed Pacific Blue Marlin months ahead.  Although Pacific Blue Marlin are caught here year around, they show up in numbers in the summer months.

Featured in the photo above is Rod Bieler and Lisa Yellowlees proudly showing off the nice Ono.