Justin and Lenora Hunter are completing a full year of traveling around the world with their two sons.  Fishing in Kona Hawaii is one of their last trips before heading to Alaska.   9 year old Aidan and 12 year old Zach are experiencing opportunities of a life time while getting to fish in places like South Africa and various other destinations in the South Pacific.  Having caught some impressive fish along the way, they could only dream about hooking a Pacific Blue Marlin.  They Did!  We left the harbor at 7:00 am for a 3/4 day charter and headed South towards Captain Cook.  They enjoyed a beautiful snorkel in the bay and anxiously got back to the boat to continue the quest.  So far we did not even get a bite.  The boys are begining to look at Me and Adam and Mom and Dad giving the “Where’s the fish?” look. No pressure there… On our way back up the line just after noon, the long rigger line is bit and line is screaming!  The Ice Blue Lucky Linda Lure comes through for us again, we are Hooked Up!  It is a Blue Marlin and 9 year old Aidan is in the chair.  With lines cleared and Adam at his side, the battle begins.  I was so amazed at the tenacity of this young man!  He fought sooo hard.  After about fifteen minutes Aidan gave his older brother Zach an opportunity in the chair.  Knowing this was Aidan’s fish, Zach lets Aidan back in the chair to finish the fight.  This fish was to the boat quickly, we had it to leader two times and had to let go. On the third try we were able to successfully get the hook out and release a nice healthy fiesty Pacific Blue Marlin.  We estimated Aidan’s fish to be about 400 pounds.  This crushes the family record Marlin held by Aidan’s Grandfather, a 300+ pounder.  I think the bar has been set quite high for Zach now!

Featured in photo above is Adam Ludwig with Aidan’s Pacific Blue Marlin to leader wearing AFTCO Release Gloves.  The Lucky Linda Lure is by Bomboy Lures. 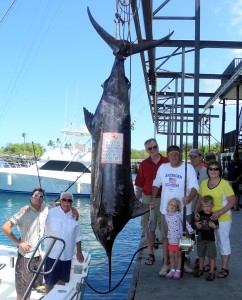 BIG Surprise for Tucson Family Fishing in Kona.  All the Roddy family wanted was some small fish for their children to pull on…. That’s how it goes in Kona, Hawaii.  The family from Tucson, AZ boarded Fire Hatt for a half day charter with the anticipation of entertaining the kids and letting them pull on some small fish.  We were headed offshore to “F” Buoy where there were some reports of bait holding.  With the idea we might catch something a little bigger for Mike (Dad) we had out a nice assortment of lures that might snag a nice Shortbill Spearfish or Mahi Mahi along the way.  Shortly after giving the family the “Chair Talk”  we settled in for the ride to the buoy.  At 8:15 Adam saw a dorsal fin slide up behind the short corner lure.  Adam quickly started teasing the fish by dropping the lure back and retreiving it a few times, finally after just a few seconds the fish opened his mouth and Adam dropped it right into its mouth.  GAME ON!  We are hooked up!  Mike is in the chair fighting the fish of a life time.  After a 55 minute fight, we have the Pacific Blue Marlin to the boat.  The fish is weak and not responding to the efforts to revive it.  It is evident we are not going to be able to save the fish, so we are boarding it and headed to the scales.  The Pacific Blue Marlin weighed in at 697.5 pounds and was 125 inches long.  Caught on a Bomboy Lure,  this is the biggest marlin for Fire Hatt this year.  The bittersweet of the story…it is two days before the start of the H.I.B.T (Hawaii International Billfish Tournament) and we would really love to have had this fish next week!  It was a good warm up.

I think they will be back to try for the small fish they promised the children. 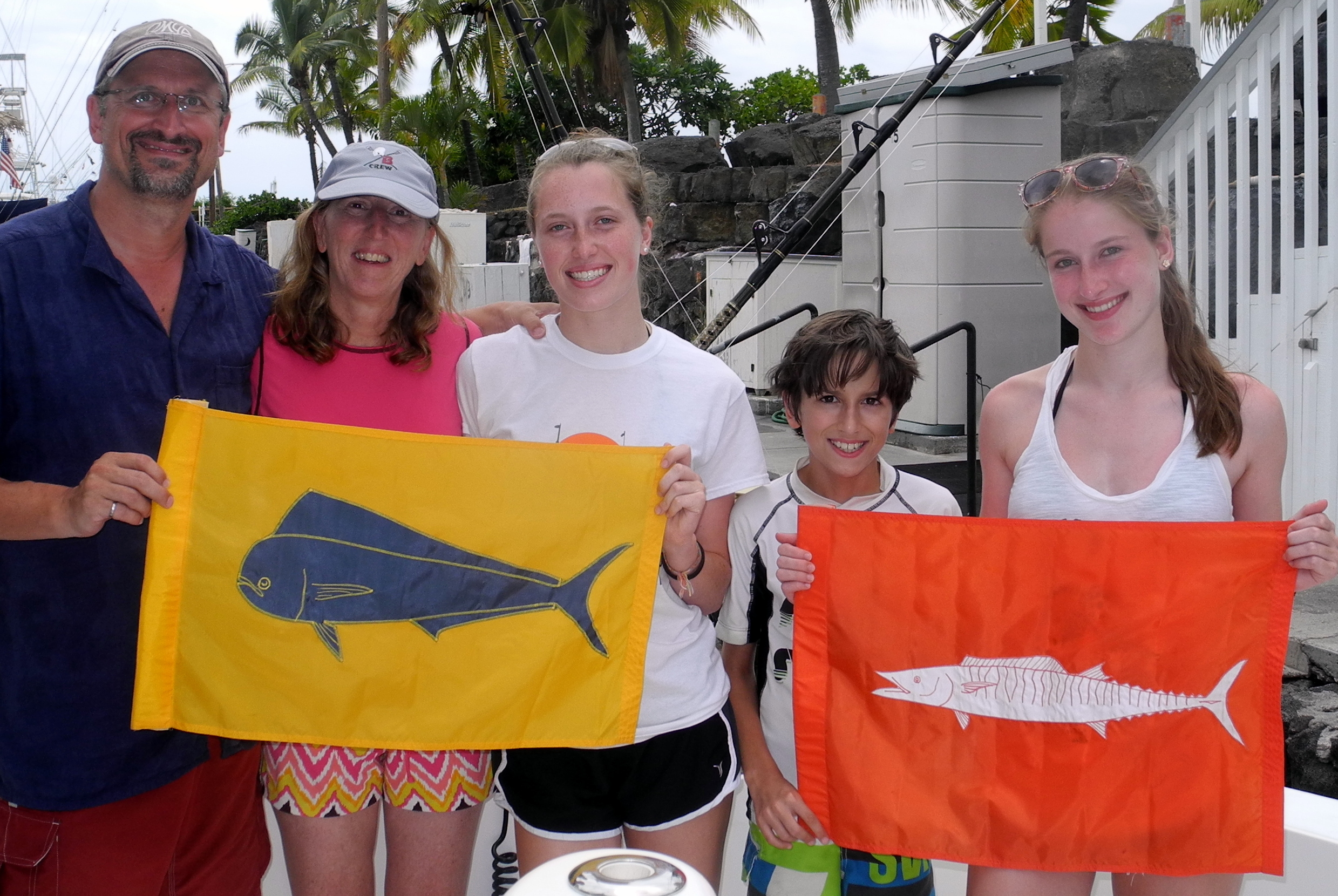 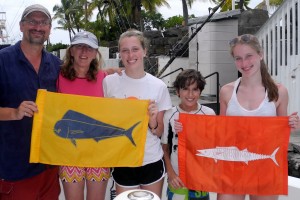 Family Fishing In Kona.  I want you to meet the Hamilton family from MA.   I dare you find anyone in this family without a smile.  All day long the smiles were contagious.  From the time we met them on the dock until we brought them back to the harbor,  the enthusiasm and camaraderie in this family never faltered.  We started out inshore with the Ono lures in the pattern.  We are headed to Captain Cook to do a little snorkeling.  On the way down the coastline Linda spotted something floating off in the distance.  Knowing this family really wanted food fish, I quickly headed a little offshore to check it out.  There it was, a nice big coiled rope.  Not only that, we had no other boat in sight and it was holding Mahi Mahi.  One pass and we are hooked up!  Dad (Jim) is in the chair.  He lands the first Mahi Mahi effortlessly!  High fives all around and Adam and Linda get the lines back in for another pass at the floater.  Hooked up again!  Caitlin is in the chair fighting her Mahi Mahi.  She too brings her fish in with little effort.  At this point, Dad’s fish is biggest.  Lines back in again and we are making another pass to try for something for Sarah.  One pass, nothing.  Second pass, nothing.  We try several more passes without a bite and then decide to leave it and head back inshore to “Ono Lane” and on to Captain Cook.  When we arrived at Captain Cook, there were Spinner Dolphin in the bay entertaining several kayakers.  We approached with the family on the bow filming the action.  It was awesome!  Later after we finished our snorkel the Dolphin were still in the bay and I was able to put Caitlin and Sarah in the water to swim with them.   What a thrill.  The girls are both Rowers and are very strong swimmers, they had no trouble swimming with the graceful animals.  Now as we are headed back up the coast to the harbor, we have the Ono lures back in the water and as planned…..we are hooked up!  The Ono we have been waiting for.  Now Sarah is in the chair and this is a much stronger fish than the Mahi Mahi.  Sarah buckles down and starts cranking.  She has landed the largest fish of the day!  With that, we decided to head back offshore and try for a Pacific Blue Marlin for Jim.  This is just one of those days… we are hooked up again!  A Pacific Blue Marlin!  Jim is getting to the chair, the stinger line is screaming , the Marlin makes a few jumps and it is off.  AAARRRGG!  Still the excitement was thrilling.  This is one of those perfect Family Fishing in Kona days.  Something for everyone!