You are here: Home / Carolyn Springer 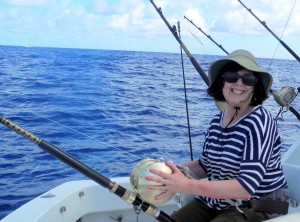 Winner Of Rotary Club Donation Scores Blue Marlin In Kona Hawaii.  Thanks to the Rotary Club Fundraiser that Fire Hatt Sportfishing and Harry Avila generously donated to, Steve and Carolyn Springer Won the bid for the Sportfishing Trip and Accommodations here in Kona Hawaii.  I had the privilege of being on the boat with this lovely couple and their friends today.  This group is from Fremont California and were a delight to spend the day with.  Carolyn was the first angler for the day and landed her estimated 175 pound Pacific Blue Marlin.  Her first Marlin!  She did an awesome job bringing it in in just under 10 minutes. Later in the day we hooked up again and had a shot at another Blue Marlin that did not stick.

Featured in the photo left is Carolyn Springer in the fighting chair!

Fire Hatt is a member of the AFTCO  Pro Fishing Team.  You can go to AFTCO.com and