You are here: Home / ahi tuna 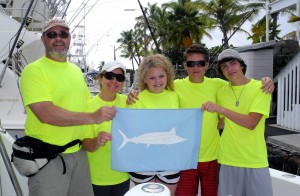 Today we had the Sorenson’s,  a “Ready to Fish” family from Arizona aboard Fire Hatt full of energy and true Team Spirit, right down to the neon yellow team shirts they were sporting!  They self labeled themselves as the “Highlighters”.  Today it was all about Mom (Amy) getting a fish.  Sooo, Linda had Mom in the chair with the rest of the family closely listening while she went through the run down.  We are ready!  Now all we have to do is wait for the fish.  There had been a couple of Blue Marlin releases today and reports of Ahi and Spearfish too.  Nothing for us by lunchtime…..ouch.  There had been a lot of bait at “F” and “C” buoys the last few days so our plan was to check them out first.  As we approached each buoy and talked to a few of the other Captains, it was apparent that the Steno Dolphin were around both buoys today so we kept moving.  It is impossible to land a fish with these Rough Toothed thieves around.  We changed out lures a couple of times hoping to put something out that would interest a fish.  Finally, Amy ask which line had the Lucky Linda Lure on it?  Well, it wasn’t out.  It had not been bit in a couple of weeks and was not in the lineup.  So with the suggestion from Amy that we run it, it was put into the pattern on the long corner where it likes to run.  The family had gone to the bow of the boat to take a few photos and hang out for a while when the fish hit!   You can probably guess the rest of the story.  The Lucky Linda is bit!  We are Hooked Up!  Everyone is trying to get to the cockpit as line is screaming off.  With the bite almost into the backing, Mom suggests that Stephen aka Dad get in the chair.  Stephen fights the fish effortlessly and brings in the family’s prized Shortbill Spearfish!  The Lucky Linda Lure is Back!  Now we still have to satisfy the need for Amy to get her fish, I think they will be back to fish again in Kona Hawaii.

Featured in the photo above is the Sorenson Family proudly displaying their team colors and the Spearfish Flag. 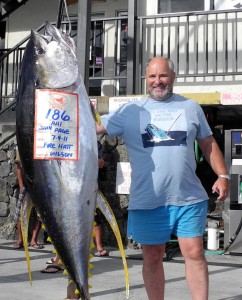 If I were involved as an Attorney Officer of the Court in a trial, I would now simply say…”I rest my case”.  I offer this as the next exhibit as to why Kona is indeed the Anglers Paradise of the World.  In this year’s World Cup Marlin Tournament, one day, a one day only, Worldwide, winner take all Marlin Tournament held on July 4th each year, with 500 pounds being the minimal weight to qualify, and 145 teams around the World participating in their own waters, in the end, only KONA had met the minimum weight to qualify as a winner.  Not just one 500 pound Marlin was caught July 4th, 2011, in Kona, there were THREE….

Add in the winner’s prize of around $600,000 and this can be an exciting day in your life. Kona has won this event more than any other location with Bermuda and Mediera also being multi winners of the event.  This year, Tom Whitcraft’s team from Thailand were aboard FIRE HATT for a full week of big league Tournaments in Kona.  Moments before the Radio crackled with the news that no qualifying Marlin were caught around the World, leaving Kona as the last participants, an explosion of the long rigger and a screaming 130 Shimano reel giving clear evidence of size and strength, 1000 feet of line disappeared in an eye blink.  Two people on the deck yelled out they saw a “Bill”.  For the next hour angler John Page, from England fought the fish back to the surface and everyone on board had visions of a large Marlin soon to be surfaced. Chuck Wilson, the Captain had voiced his concern that when a big fish like this does not surface, it could well be a large Ahi (Yellowfin Tuna) but the fish did not “dig deep” and stay straight down but fought at shallower angle….so maybe….. Alas, not to be, an Ahi that weighted 186 pounds, gilled and gutted, appeared….and it was tail hooked…which explains the “I saw a Bill” comments.  They saw the blinding blur of the tail fins no doubt.  Can any of you imagine at being disappointed capturing and weighing a 186 pound (probably over 200 with blood and entrails attached) Ahi?????   Such is the World of Tournament fishing. Congratulations to the boats Maui Jim (792 pounds), Sea Geni (585 pounds) and the Five Star (535 pounds) for their huge fish in the World Cup this year. 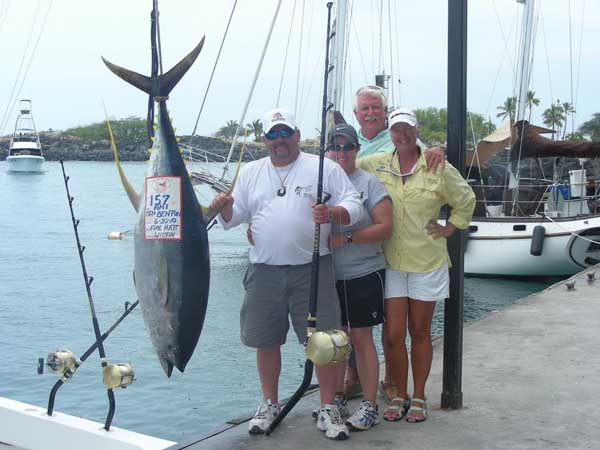 Ken and Zale Benton from Gloversville, NY landed a 157 lb Ahi Tuna while fishing on the Fire Hatt with Captain Chuck and Linda Wilson.  We had an early bite that was believed to be a Spearfish that did not stick.  After lines were reset and the anticipation was high…another strike!  Ken fought the Ahi 34 minutes before landing his prize.