Fun, Fun, Fun! I know most of you will not get the pleasure of fishing in Kona with this group. Words can’t describe how much fun they were. At one point we were entertained by Doug Casady with a guitar number to try to raise a fish. No monster fish were caught.  One mystery fish was lost one ono caught. Lisa Tallman (right) works and giggles as she is fighting the mystery fish that came off  just minutes into the fight. Her sister-in-law, Mary Casady hooked into a 30lb ono and brought it to the boat as her husband Doug encouraged her on! Great team effort!  I go with lady luck any day. Mary’s ono is featured in center photo and we look forward to more fishing in Kona with them. 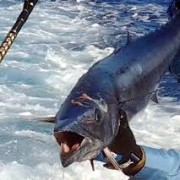 The Mahi Mahi Are Here
0 replies