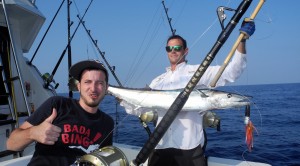 Offshore Adventure for Joseph Sweeney and Company.  Joseph Sweeney is getting married this week.  His buddies, Chris, Mack, Jeff, George, Joseph and Justin treated him to a day of fishing and snorkeling here in beautiful Kona Hawaii.  Although Joseph lives in the Hilo area, he had never fished Kona.  The day started simply with Ono lures in the water and we headed down “Ono Lane” for a quick snorkel at Captain Cook Bay.  The guys are excited with the anticipation of what the day may bring.  Just a short distance from Captain Cook the long corner rod is screaming.  Joseph is in the chair fighting what turns out to be one of our biggest Ono this season and His biggest fish ever!  Estimated at 35+ pounds, the Ono was such a thrill for the group.  Once we finished our snorkel, we put the “big guys” out and head off shore for possibly a Pacific Blue Marlin or perhaps the coveted floater.  Sure enough, we spot a pile of birds at about 2700fa.  Once we arrived in the area we spotted a large cargo line that had been at sea for some time.  With the first pass, a nice Mahi Mahi is caught.  Then mayhem breaks loose.  These are all nice 20-30+ pound Mahi Mahi.  We did get another nice Ono in the mix too.  With the fish box full and the long ride home, we put out a few high speed lures and reluctantly headed in.  The group rode the bow all the way back to the harbor laughing and talking about their offshore adventure.  A good time was had by all.