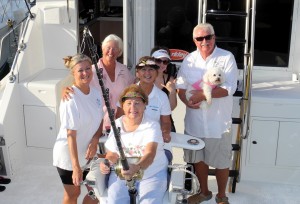 The Lucky Linda Lure and Lady Luck came together again for Team Fire Hatt last Saturday while fishing the 16th Annual Wahine Tournament in Kona Hawaii sponsored by Huggo’s Restaurant.  Linda Wilson, Kay Kolt, Kathy Nelson, Julia Leino and Dolly were an all girl team lead by our Captain Chuck Wilson.  We had a short corner bite early that screamed out line and then was off.  Followed by that, Linda Wilson successfully released the first Blue Marlin for our team after a 15 minute fight.  We are on the board!  Soon after that, the long rigger was bit.  Angler Kay Kolt brought another Blue Marlin to the boat quickly and just 20 feet from leader, it was off!  Two more bites later and the tournament is over.  We are One for Four today.  The winning fish was caught by Kari Teshima.  She reeled in a 733-pound Pacific blue marlin.  The fish earned the four-member team 733 points in the one-day, 64-team fishing tournament.  Kaimalino, where they fished with Capt. Manu Hind.   (The Lucky Linda Lure is made by Bomboy Lures.) 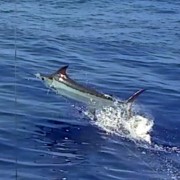 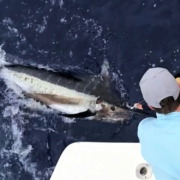