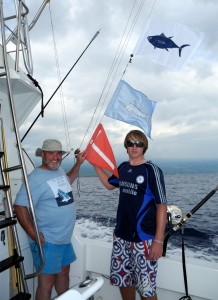 The Kona Tournaments are in full season.  With the July Fourth Firecracker Tournament,  the Kona Kickoff and the Marlin Magic  Tournaments behind us, we are in the middle of the three day Skins Tournament.  We released fish in both the Firecracker and the Kona Kickoff.  The big one just wasn’t in the cards for us.  On day two of the Firecracker Tournament,  Richard released a 200+  pound Pacific Blue Marlin.  His first Marlin.  On the first day of the Kona Kickoff Tournament John Page landed a 186 pound Yellowfin Tuna.  While this being a fish of a lifetime for John and a personal boat record for the Fire Hatt, it was disappointing that is was not the coveted Blue Marlin we were competing for.  Later that day, another strike lands Nick  Whitcraft a nice Shortbill Spearfish.  While this fish did not count in the tournament either, it was an exciting day for the team.

Kona is indeed the Anglers Paradise
Scroll to top