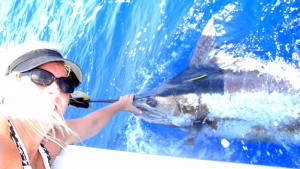 Mike and Sharon McAllister from Tampa Florida celebrated their 25 Anniversary and their first Pacific Blue Marlin while fishing in Kona Hawaii aboard the Fire Hatt .  Mike had his shot at a Marlin  on an early morning bite that did not stick.  After a long pause in activity, we are bit again.  This time the fight is on!  Sharon is in the chair this time and what a great job she did!  After a 25 minute fight, she has the fish to leader.  Captain Chuck leadered and held the Marlin so Sharon could get out of the chair and assist with the release.    We estimated the Marlin to be around 200+ pounds.  After we returned to the harbor Sharon commented that her adrenaline was still in high gear!  I’m thinking the adrenaline will last as long has that big smile.  We are looking forward to having them back so Mike can land his first Marlin.