Blog - Latest News
You are here: Home / Fish of a lifetime for Twin Canadian Brothers 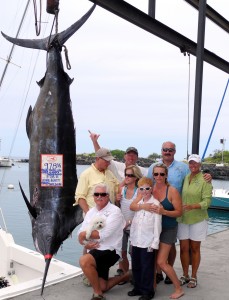 Larry and Greg Hosegood from Winnipeg, Canada along with their families boarded the Fire Hatt early to get first crack at a fish.  They are fishing guides in Canada and realize the old saying “The early bird gets the worm”.  After giving the chair rundown to Greg, Linda had Larry’s son Skyler in the chair demonstrating what he could expect if a smaller fish bites.  Then the big fish hit the long corner bait.  A favorite lure of Linda’s that Bomboy Llanes (Bomboy Lures) crafted  especially for her.  It is appropriately named the “Lucky Linda” and had consistently been bit all week.   Three hours and five minutes later we had the Marlin to the boat.  It was tail wrapped and died during the fight.  I only wish everyone could have witnessed the brotherhood between these two men.  They coached and encouraged each other and kept remarkably cool during the entire fight!  They were saddened by the death of the fish and really wanted it to be released.  As did we.