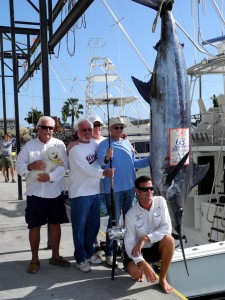 Family Adventure Aboard Fire Hatt.  Mark Nikkel from Chicago, his father John and his father in law Wilber, both from Michigan joined us last week for a day of family fishing.  Mark has fished with us in the past and he landed a nice 450 pound Blue Marlin.  Now returning with his family, he wanted to give it another try…maybe something bigger?  With that said, we head out.  Reports from the few days prior told us that it was lumpy up north on the “grounds” so I headed south.  It was a pretty quiet morning with no action.  Then mid day, just off Captain Cook  about 1:30 in the afternoon one of the rigger lines came down.  Nothing forcefull, it acted like a rubber band failure.  While Adam was putting that line back up, the stinger came down pretty hard.  I could see a fish still tracking the lure and Adam immediately started to tease it.  We are Hooked Up!  The Marlin took the absolute smallest lure in the pattern.  A small slender bullet made by Al Bento.  The fish was fought on a Ken Matsuura 50 with 130 lb Amalon mono.   With lines cleared and his Father the chair, the battle is on!  John fought the fish for about 45 minutes and then turned the fight over to Wilber.  Wilber fought the fish to the end.  Total fight time was 1 hour 40 minutes.  Both of these fishermen are 75 years old!  Until now, the largest fish for these men was a 40 pound Salmon.  Once Adam got the fish to leader, we gave Mark the honor of setting the first gaff shot.  I placed the second gaff and the three of us pulled the trophy on board.